Recently, we’ve seen great progress in representation learning. For example, trained in a self-supervised manner, BERT [1] beats humans in some natural language processing tasks and SimCLR [2] shows comparable performance to a supervised model in a computer vision task. Also, extensions to different modalities of data such as graphs are emerging.

In this post, I introduce some recent advances in representation learning in texts, images, and graphs, and discuss why representations learning is important for more general AIs.

BERT is well described in the following figure from this great blog post. BERT is a Transformer-based model that is trained in two steps: 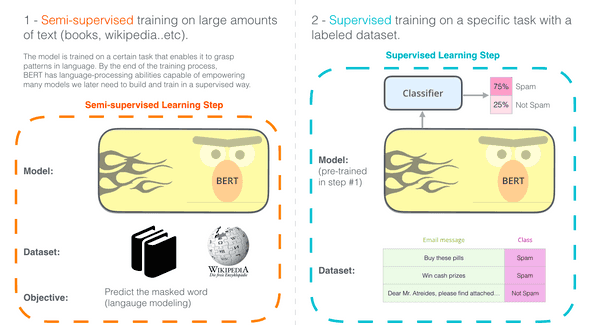 In this case, the output from the BERT block is called “representation.” Just by the surrogate task (predicting masked words), BERT acquires well generalized representations and shows great performance in downstream tasks ranging from question answering to named entity recognition. For its generalizability and simplicity, BERT became popular at once (4,000 citations in two years!).

The impact that BERT made on the research area was so great that many works have been following it to this day. Some explored different pre-training tasks, some reduced the model size while maintaining its performance, and others further increased the model size to achieve state-of-the-art.

The figure below shows that the pre-trained models have been growing larger and larger since ELMo was born. Today, the largest model called Turing-NLG (born in Feburary 2020) has as many as 17 billion parameters! This is 50 times larger than BERT 😲 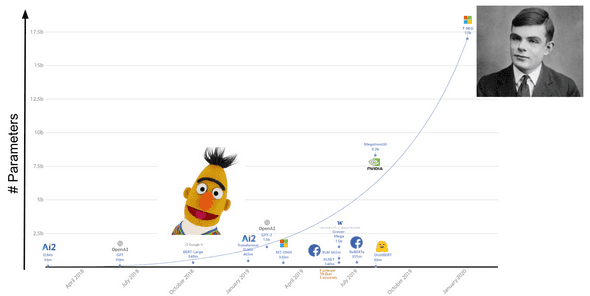 Of course, Turing-NLG is not only extremely large. It outperforms the state of the art on many downstream NLP tasks. Moreover, the authors say:

We have observed that the bigger the model and the more diverse and comprehensive the pretraining data, the better it performs at generalizing to multiple downstream tasks even with fewer training examples.

It seems that they empirically know that a larger model, more data, and longer training lead to better performance, and they are moving forward in that direction.

A Similar Approach to Images

A similar approach is taken to the self-supervised pre-training for image representations by SimCLR [2]. The pre-training scheme of SimCLR is shown below:

First, a batch of images (batch size B) are transformed in two ways, resulting in 2B images. Each transformation is a random combination of two simple augmentations (e.g., random cropping and color distortion). They are fed into a CNN to produce the representation of each image. Then it is non-linearly projected by an MLP. The model compares random pairs from the 2B outputs and it is trained so that outputs from the same image are close and ones from the different images are distant. In this sense, the pre-training scheme is referred to as contrastive learning (CL of SimCLR).

SimCLR outperforms all the previous self-supervised and semi-supervised learning on ImageNet classification in different model sizes. Surprisingly, it even matches the performance of supervised learning in a smaller model, ResNet-50. Here, again, the larger model leads to higher accuracy. 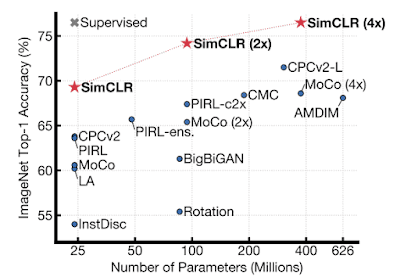 Figure from the original paper [2] 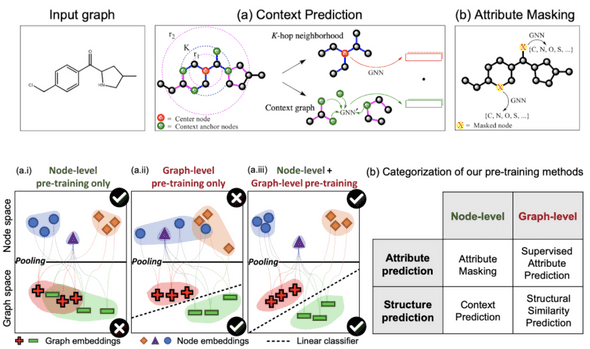 Figure from the original paper [3]

Note that the attribute masking task is quite similar to the masked language model used in BERT.

When GNNs are applied to drug discovery (one of their major potential applications), this self-supervised representation learning is very important. This is because, in most cases, the number of labeled samples (e.g., which compounds are toxic and which are not) is limited while there are a lot more unlabeled samples (i.e., the structure of compounds).

Furthermore, good representations can bridge different modalities of data. Image captioning (a.k.a. image-to-text) is a task to give an appropriate caption to the given image. If the model has good representations of objects and they are abstract enough, they can translate images to texts.

There is also a task to do the reverse: text-to-image. The objective of this task is to generate an appropriate image based on the given caption. Doesn’t it look intelligent?