A Deeper Look at ROC-AUC

You’ve probably heard about the ROC-AUC, or simply AUC, which is defined as the area under the receiver operating characteristic (ROC) curve. This is indicated by the blue area in the figure below and is used to evaluate the performance of classification models. 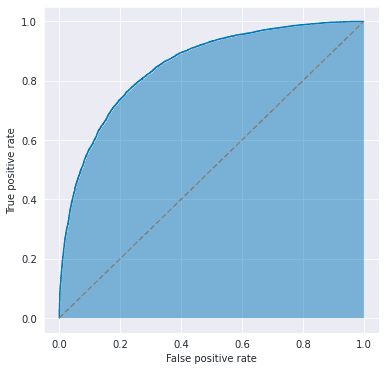 The ROC curve is obtained by plotting the pairs of false positive and true positive rates as changing the threshold for binary classification, where

Therefore, this metric does not depend on the choice of the threshold and is useful when you want to consider the TPR-FPR trade-offs. It takes a value of 0.5 (= area under the dashed line) for a random binary classification model and 1.0 (= area under the line TPR=1) for a perfectly correct model.

ROC-AUC has a linear relationship with the Gini coefficient, which is defined as the ratio of areas A/(A+C) in the figure below.

Looking at AUC from a Different Perspective

Let’s consider another way of looking at ROC-AUC with a fun example: an emoji classifier. This classifier can predict whether the given emoji is happy or not, but its prediction is not perfect. Its outputs look like below:

Well, by increasing the threshold from 0.0 to 0.9, you’ll get a ROC curve that looks like below. The threshold values are indicated along the line, so you’ll see that as you increase the threshold, both FPR and TPR go down. 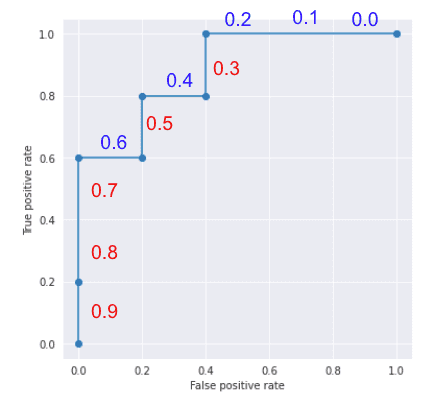 By counting the number of squares enclosed in the grid, we find that the ROC-AUC is 0.88 (one square is equivalent to 0.04). 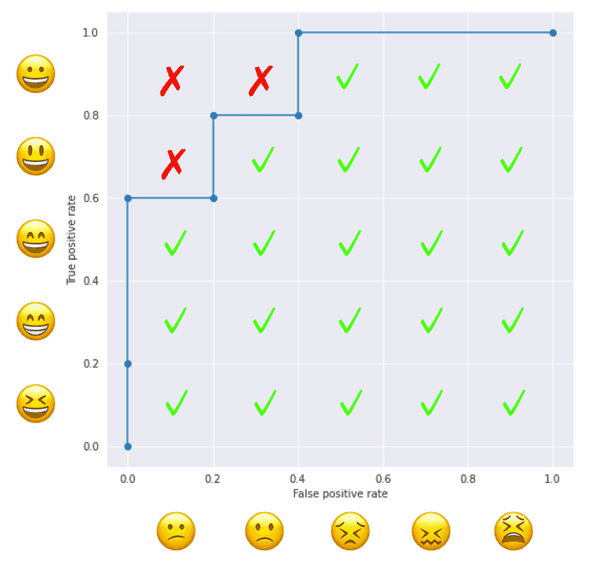 Now we have the following formula:

Relationship with Mann–Whitney U Test

This counting operation can also be seen in the Mann-Whitney U test (a.k.a. Mann–Whitney–Wilcoxon (MWW) test and Wilcoxon rank-sum test). MWW test is a nonparametric test of the null hypothesis that two populations are the same, particularly for the case one population tends to have larger values than the other.

∑j=1n​S(Xi​,Yj​) counts the number of Yj​ that is smaller than Xi​, and the outer ∑i=1m​ takes the sum over all the samples from X. If the U statistic is sufficiently large, the MWW test rejects the null hypothesis.