This section briefly review the definition of these metrics. If you are already familiar with them, please skip to the experiment section.

where Gini(n) denotes Gini impurity at the node n and p(n) the ratio of the node n’s sample size to the total sample size. Gini importance of feature f is defined as the sum of the impurity improvement of the nodes using the feature.

Gini importance is used in scikit-learn’s tree-based models such as RandomForestRegressor and GradientBoostingClassifier. You can call it by model.feature_importances_ or something like that.

Split importance is also a measure of feature importance for tree-based models. It simply counts how many times the nodes split on the feature. It assumes that the more important the feature is, the more times it is split. This sounds naive after introducing Gini importance, but it is actually used in LightGBM by default! You have perhaps used it before without knowing it.

Above two measures are computed when the training is over, so you don’t need any out-of-bag validation set or re-training.

Though the idea behind this algorithm is easy to understand, its computational cost is higher than other importance measures because it requires re-training as many times as the number of features.

Permutation importance is also model-agnostic and based on the similar idea to the drop-column but doesn’t require expensive computation. It is computed by the following steps:

It is supported by scikit-learn v0.22 or later and can be easily called by permutation_importance(model, X_val, y_val) or something like that.

Obviously, the target variable is never explained by the explanatory variables.

I compared the four importance measures in the following four cases: 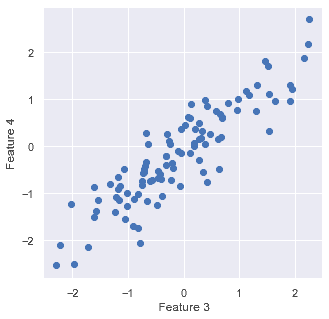 Two columns are correlated in the colinearity setting.

For each importance measure, I trained a LightGBM regressor with the default hyperparameters for 100 times and plotted its histogram. The training set contains 1,000 samples and the validation set, if necessary, contains 200 samples.

The source code used for the experiments is available at https://github.com/shionhonda/feature-importance/.

As expected, for all the importance measures, each feature contributed equally. 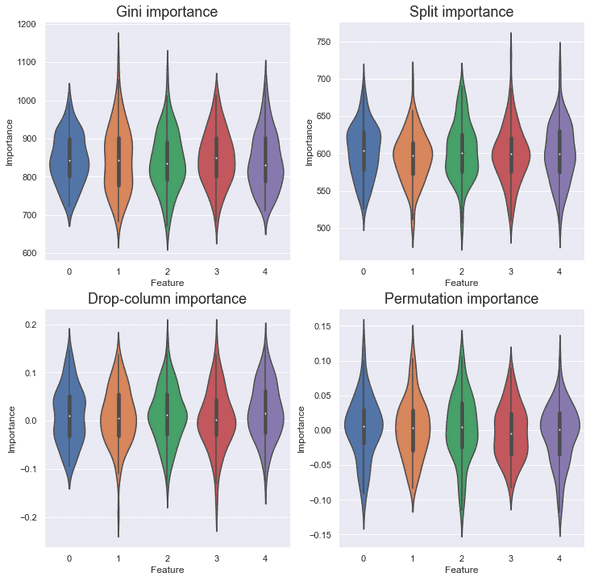 But ideally, the features should have no contribution. Why the scores are not zero for Gini and split importance? This is because they don’t use a validation set and simply reflect the result of training. You don’t trust training accuracy, right?

This setting changed the result dramatically. X4​, which has the lowest cardinality with the values −3,−2,…,3, made little contributions in terms of Gini and split importance. It looks rounding to the third or second decimal place didn’t change the cardinality very much. Also, it is worth noting that the variance of the score of X4​ is smaller than other variables in drop-column and permutation importance. 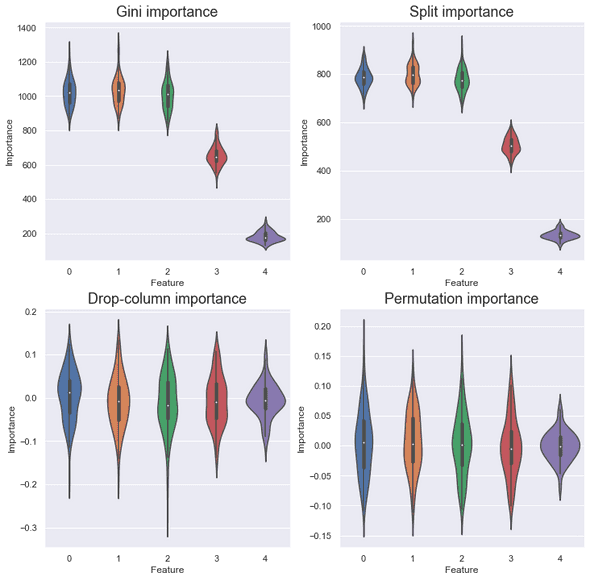 The duplicated X4​ did not contribute at all for all the importance measures. This is natural because the model can get all the information of X4​ from X3​ and vice versa. I suppose the broken symmetry came from the order of features (the column order matters sometimes!). Drop-column importance treats features equally so the contribution of X3​ is also zero. 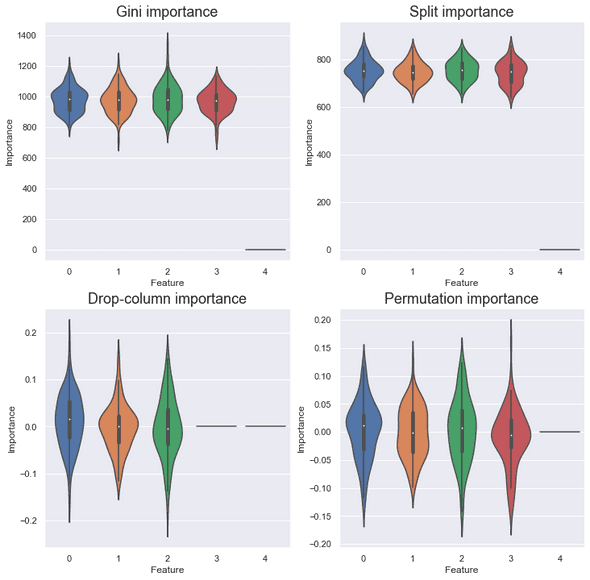 In the colinearity setting of Gini and split importance, it is observed that X3​ and X4​ fought for contributions and resulted in the less importance than the other features. This tendency is hardly seen in the drop-column and permutation importance. 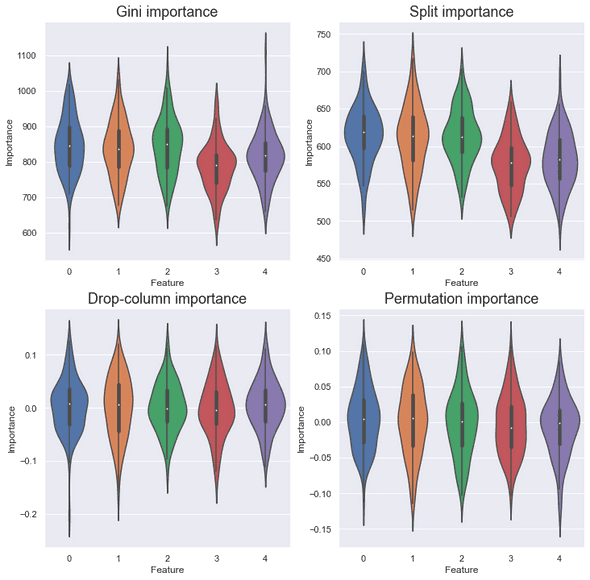 In the last part, I inspected the behavior of the four importance measures when predicting the random target, but this may be too far from reality. So, this part assumes the target value as the simple average of the explanatory variables with a noise term.

Note that the distribution of Y is the same as the one in the last part.

The result is again as expected. This time, the scores of drop-column and permutation importance are all positive. 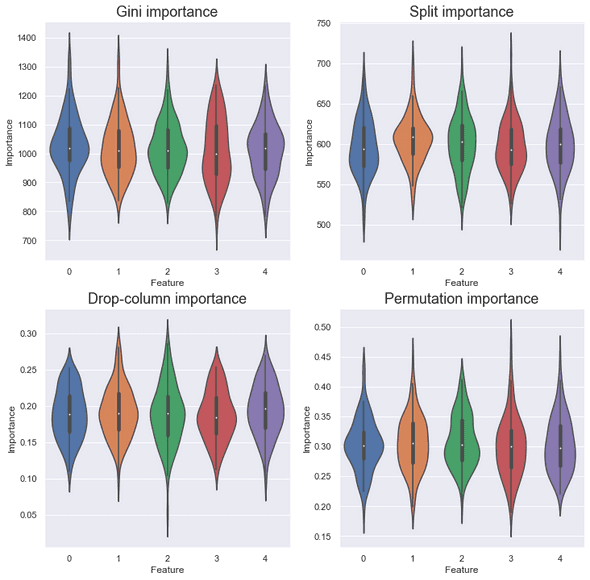 The overall trend is the same as the last part. Now it can be said that drop-columns and permutation importance are robust to differences in cardinality. 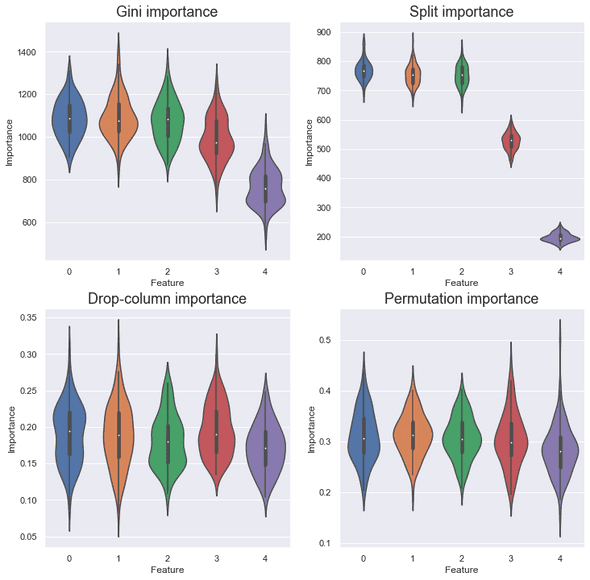 Surprisingly, according to the Gini and permutation importance, the duplicated X3​ is more important than X0​, X1​, and X2​. Moreover, you’ll find the opposite relationship in the split importance. 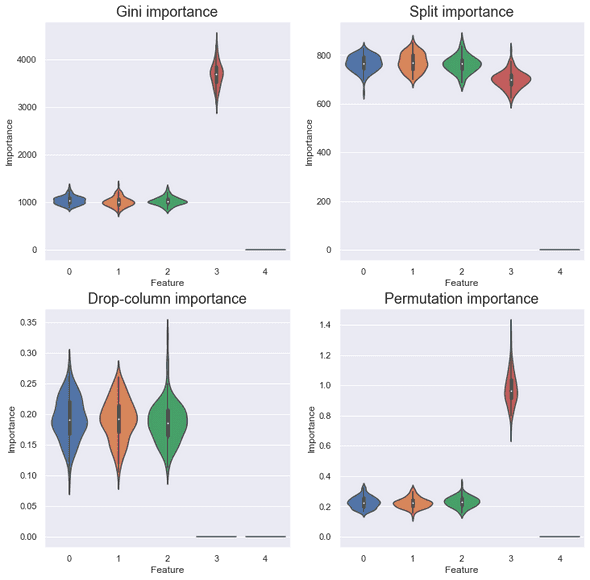 The former phenomenon is explained by considering that the LightGBM model ignores X4​ and Y is produced by the following equation:

Now it’s clear that X4​ is “important”, but I don’t figure out why it is “less important” in split importance. I appreciate any comments about this result😄

The overall trend is the same as the duplication setting, but the variance of the scores of X3​ and X4​ are very large for Gini importance. 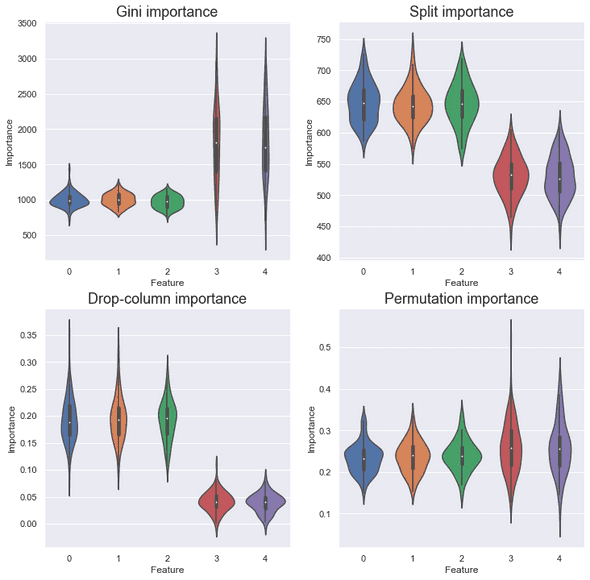 In this post, I compared the behaviors of different feature importance measures in some tricky settings.

There are other importance measures such as SHAP and null importance, but I leave them for future work.