Since its debut in 2018, StyleGAN attracted lots of attention from AI researchers, artists and even lawyers for its ability to generate super realistic high-resolution images of human faces. At the time of this writing, the original paper [1] has 2,548 citations and its successor StyleGAN2 [2] has 1,065. This means that the number of application works is growing at a dizzying rate. To keep me from getting overwhelmed, I’m writing this post to overlook this research field in an organized way. Of course, it’s impossible to read thousands of papers, so hereafter I’ll focus on the papers that relate to image manipulation including GAN inversion and 3D control.

First of all, let’s briefly recall what StyleGAN was and what the key updates of its subsequent versions were.

The architecture of the original StyleGAN generator was novel in three ways:

These are best described in the figure below. 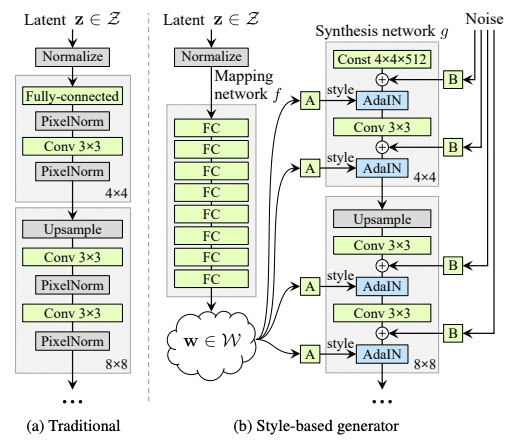 With these features combined, StyleGAN can generate images that are almost impossible to discriminate for humans.

This quality was so amazing that many people rushed to train StyleGAN with their own datasets to generate cats, ukiyoe, Pokémons, and more (see Awesome Pretrained StyleGAN for details).

StyleGAN has another interesting feature called ”style mix”. With two latent codes zA​ and zB​ (and corresponding wA​ and wB​), one can switch the inputs from wB​ to wA​ in the middle of the synthesis network and get a mixed image that has B’s coarse styles and A’s fine styles. 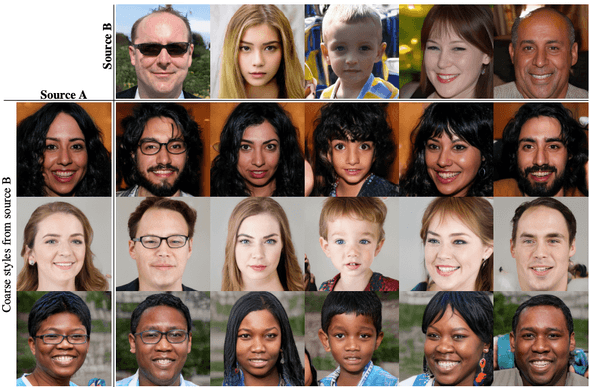 The human face images generated by StyleGAN look convincing enough, but if you have a careful look, you may notice some unnatural artifacts. In StyleGAN2 [2], some architectural optimizations were made to StyleGAN to facilitate even more realistic generation, though I don’t go into the technical details here.

One of the most important updates of StyleGAN2 is that by regularizing the perceptual path length, it became easier to invert. Now it is possible to encode a given image (either generated or real) into the intermediate style space W.

This paved the way for GAN inversion — projecting an image to the GAN’s latent space where features are semantically disentangled, as is done by VAE. As we’ll see in the next section, StyleGAN2 is currently the most widely used version in terms of the number of application works.

In June 2021, the Tero Karras team published Alias-Free GAN (later named StyleGAN3) to address the undesirable aliasing effect that leads to some details glued to the absolute coordinates of the image [4].

A video is worth a thousand words. The official video clearly demonstrates the “texture sticking” issue and how StyleGAN3 solves it perfectly. Now it can be trained on unaligned images like FFHQ-U. For StyleGAN3 applications? There are only a few yet.

GAN inversion is a technique to invert a given image back to the latent space, where semantic editing is easily done. For example, when you get a latent code z of your portrait x, you can generate a younger version by adding the “decrease age” vector n and feeding it to the generator. 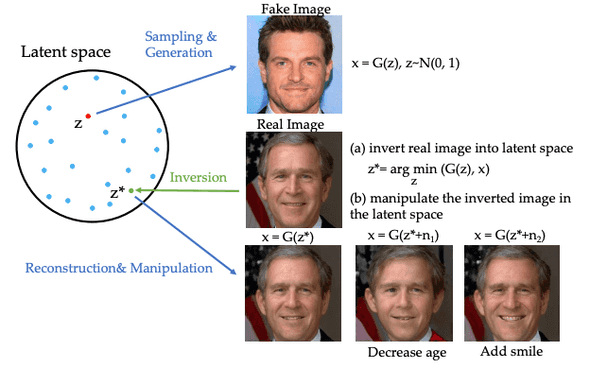 There are three approaches to GAN inversion:

Let’s have a look at some examples.

Image2StyleGAN [6] is a simple but effective implementation of an optimization-based approach. It minimizes the sum of the perceptual loss and L2 loss to get the embedded latent code. 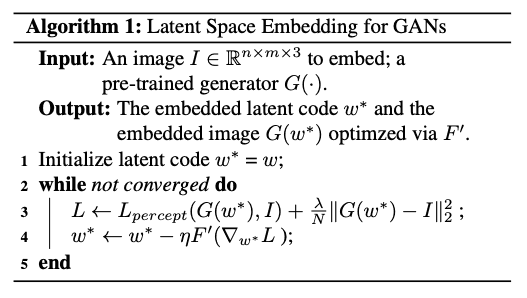 The authors noticed that the 512-dimensional intermediate latent space W is not informative enough to restore the input image. So, they extended the latent space to W+, a concatenation of 18 different w∈W vectors, one for each input to the StyleGAN’s AdaIN layers. The resulting W+ space is well disentangled and allows multiple face image editing applications, including style transfer and expression transfer. This feature was further explored in Image2StyleGAN++ [7].

The learning-based approach pSp (pixel2style2pixel) is a general image-to-image translation framework [8]. The encoder is trained to minimize the reconstruction loss (the sum of L2, LPIPS, identity, and latent code regularization loss) and directly translates the input image to the extended latent code (∈W+).

The pSp encoder can be trained on images not represented in the StyleGAN domain. In that way, pSp can generate images conditioned on inputs like sketches and segmentation masks. 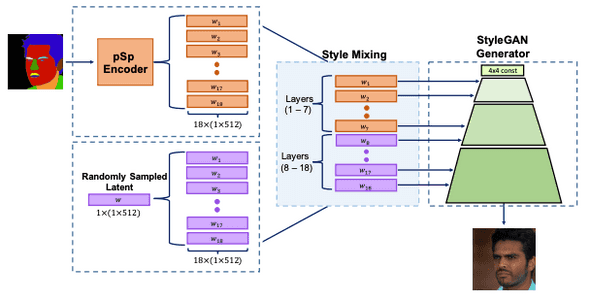 e4e (Encoder for Editing) is a learning-based encoder specifically designed for semantic editing after inversion [9].

First, the authors summarized the variations of the intermediate latent space W and the extended W+. They use ⋅k notation for the layer extension and explicitly denote W∗​ when it is not the equal distribution to W. Now, four variations listed in the table below should be considered. The conventional W+ space is now Wk or W∗k​ depending on its distribution.

e4e employs the pSp’s architecture but has control of these tradeoffs by putting W∗k​ closer to Wk and W∗​. The editability-aware encoder achieves good reconstruction and semantic editing at the same time.

To improve the reconstruction accuracy of pSp and e4e, ReStyle is tasked with predicting a residual of the current estimate to the target [10]. It works with a negligible increase in inference time. 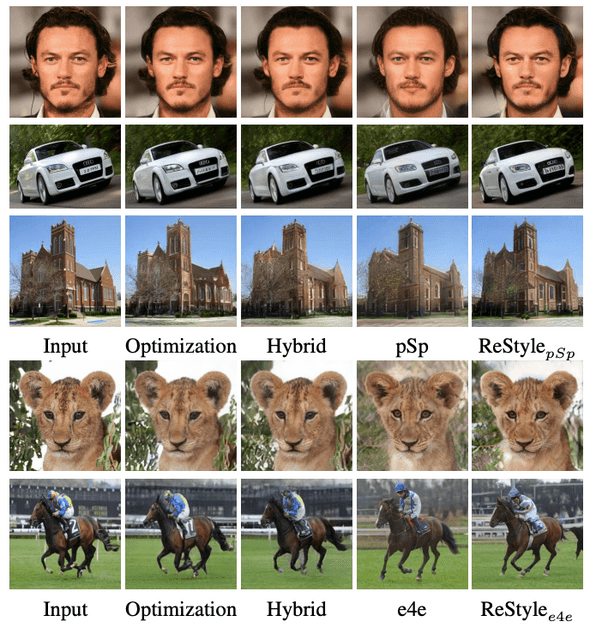 Once the latent code is obtained, we can semantically edit the original image by moving it to a certain direction in the latent space. There are mainly two types of input:

To put it simply, the former is more like a copy-pasting, while the latter attempts to control the output proactively. Plus, the latter assumes that the edits are made multiple times interactively.

In this area, it is usually assumed that StyleGAN inversion algorithms are given.

Image2StyleGAN++ extends Image2StyleGAN to take spatial masks as input to allow local editing [7]. For example, it can perform image crossover:

Thanks to the well-disentangled latent space, the k-means clustering of the hidden layer activations of the StyleGAN generator provides an interesting insight: the clusters are semantically meaningful even they were decomposed in an unsupervised way [11]. 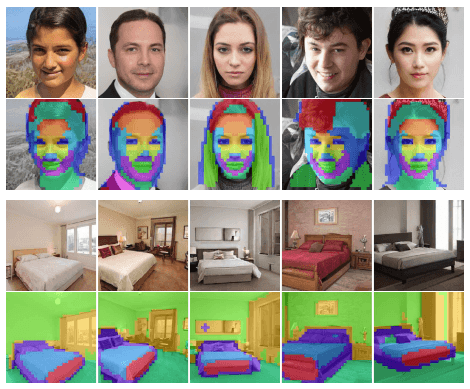 Then, the contribution matrix (each element is the contribution of channel c to cluster k) can be used to determine the style mixing coefficients. This enables to make a local edit (e.g., swapping eyes). 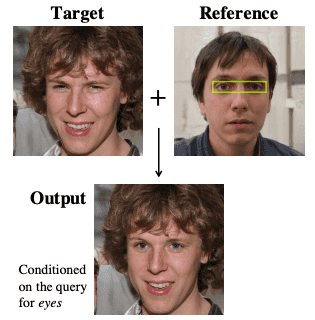 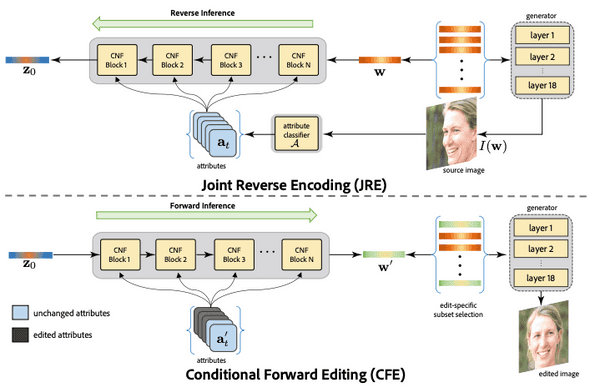 The results are impressive. The two source images are real images (i.e., not generated by StyleGAN), and StyleFlow successfully translates these extreme samples.

Wu et al. quantitatively analyzed how disentangled StyleGAN’s latent spaces are. Although the extended intermediate latent space W+ is the standard choice, they discovered that the style space S is actually more disentangled than W+ [13]. As depicted in the figure below, the style space S is spanned by a concatenation of affined intermediate latent codes.

The images below demonstrate how well the style space S is disentangled. Each pair is the result of decreasing (-) and increasing (+) a single element of the style code. The numbers in the bottom left corner indicate the layer index and the channel index. Note that the base image is a fake one generated by StyleGAN2. 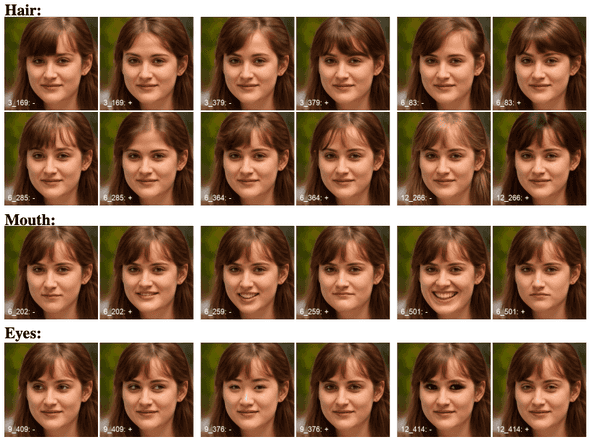 Retrieve in Style extended Editing in Style to edit more global features such as pose and hairstyle [14]. 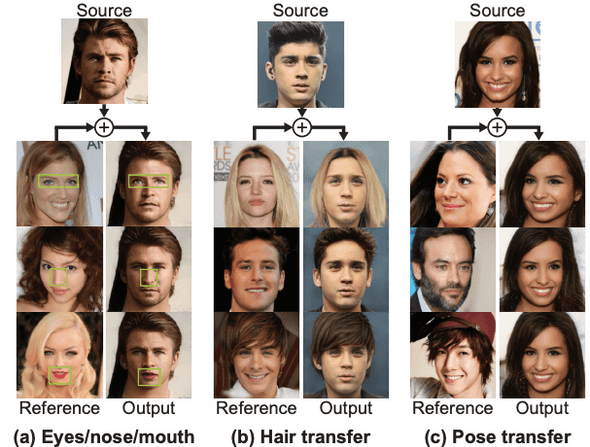 As the title suggests, the authors also provide an algorithm for attribute-guided image retrieval.

Among several types of semantic edits, reposing is the most difficult task as it often requires drastic and global changes. Thus, some works explicitly estimate 3D information and use it to perform visually natural reposing.

StyleRig can control human face images generated by StyleGAN like a face rig, by translating the semantic editing on 3D meshes by RigNet [16] to the latent code of StyleGAN [15]. Here, StyleGAN is supposed to be pre-trained and RigNet can be trained in a self-supervised manner.

Pose with Style exploits StyleGAN2 to perform human reposing [17]. The target pose information is used as input, and the original image and coordinate information are injected as style. This algorithm is also applicable to the virtual try-on task. 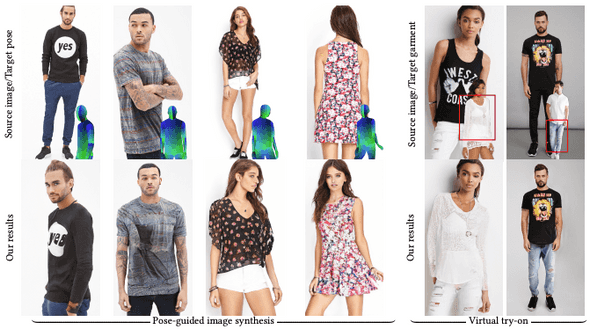 StyleNeRF integrates StyleGAN2 and NeRF (neural radiance field) [19] to generate 3D-consistent high-resolution images [18]. The inputs to the synthesis network are the intermediate latent code w and the low-resolution feature map generated by NeRF from the camera pose p. 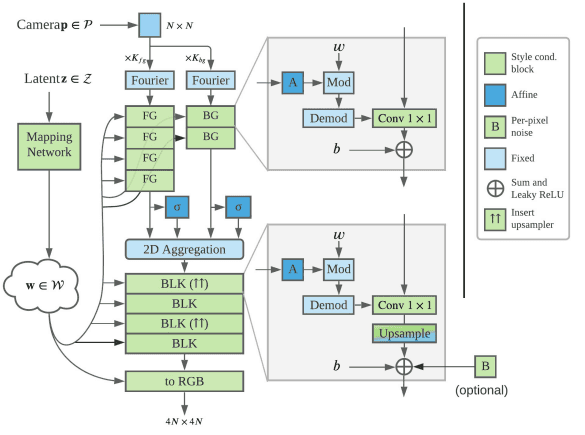 The figure below shows how StyleNeRF enjoys the benefits from both NeRF’s 3D consistency and StyleGAN2’s perception quality.

Image taken from [18]. The leftmost is the low-resolution feature map generated by NeRF.

Last but not least, text-guided manipulation is an interesting application of StyleGAN.

Based upon CLIP (contrastive language-image pretraining) [21], the state-of-the-art text-to-image generator, StyleCLIP finds the optimal direction to move forward in the latent space so that the input image will be edited according to the instruction [20].

A wide variety of text instructions can be accepted. Since CLIP has certain knowledge about proper nouns, it is possible to edit a face to look like “Emma Stone”.

StyleGAN had such a great impact that its applications are growing fast. I hope this article will give you some sort of perspective on them.

Thanks for reading. As always, feedback is welcomed.

Custom Objective for LightGBM
Meet Pandas: Grouping and Boxplot
How to Setup Jupyter in Pipenv / Poetry
PageRank Explained: Theory, Algorithm, and Some Experiments
Downsizing StyleGAN2 for Training on a Single GPU