Transformer has become a de-facto standard choice when modeling texts and sequence-like data. It is also one of the hottest research topics. Since its publication in 2017 by Vaswani et al., Transformer has undergone various application studies, model enhancements, and attempts to uncover the principles of its ability. This post aims to provide an overview of those studies in terms of computational efficiency, applications to images, computational theory, and language models.

I omit for brevity the introduction to Transformer itself. If you are not familiar with it, I recommend the latest survey by Tay et al. [1] and a blog post by Lilian Weng [4] that include a clear and concise introduction section.

Please be reminded that “Transformers” can be used in three ways:

The key difference is causality. The encoders don’t have to be causal, while the decoders do.

The well-known problem of Transformer is that its computation has quadratic time and memory complexity in the input sequence length n, which comes from the matrix multiplication in the self-attention blocks. This prevents Transformers from being applied long sequences such as high-resolution images, audio signals, and protein sequences. 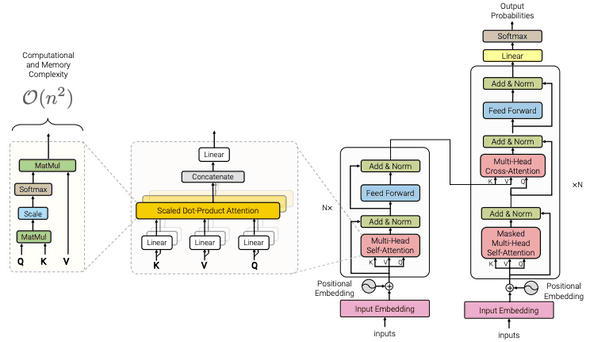 To tackle this problem, plenty of efficient Transformers have been proposed, most of which are named in the form of X-former: Reformer, Linformer, Performer, … just to name a few. Recently, a team from Google published an excellent survey on this topic [1]. Here are the representative figure and the table to grasp X-formers. 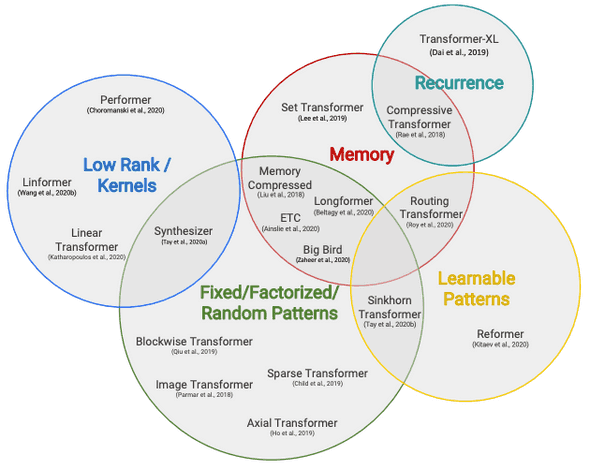 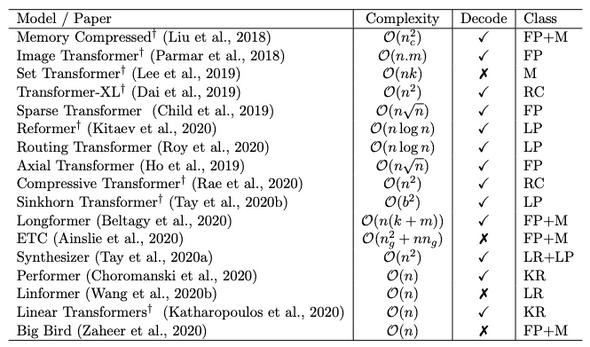 Images taken from [1]. It is not clear from the paper whether the "Complexity" column of the table refers to computational or memory complexity.

They propose the following taxonomy for X-formers:

Sparse Transformer [Child+, 2019] sparsifies the attention matrix by adopting local attention (illustrated in the figure below) and strided attention.

This modification reduces the memory complexity of the attention layer from O(n2) to O(nlogn). However, it requires custom GPU kernels to implement a block-sparse matmul (i.e., matrix-matrix multiplication) operation.

The paper by a team from OpenAI presents impressive results. The autoregressive generative model generates texts, 64x64 sized images, and even raw audio waveforms (you can listen to them in the official blog post). Sparse Transformer is important because subsequent models such as Longformer and Big Bird are based on it.

Sparse Transformer is inherited to another research work called Jukebox, which successfully generates music waveforms in a variety of genres. Jukebox can generate minutes-length music conditioned by genres, lyrics, and artists (from Ella Fitzgerald to Kanye West). All 7,131 generated samples are available here. They do make sense!

Routing Transformer [Roy+, 2020] uses learnable patterns to sparsify the attention matrix. It clusters the input tokens with the k-means algorithm in an online fashion so that each token only attend to the tokens belonging to the same cluster.

Reformer [Kitaev+, 2020] uses locality sensitive hashing (LSH) to learn attention patterns. LSH projects nearby vectors to similar hashes and thus can be used to classify tokens into some buckets.

Reformer also introduces reversible layers, where activations of the L-th layer can be restored from those of the (L+1)-th layer. This mechanism allows the model to discard activations of all but one layer to enable further memory savings.

Linformer [Wang+, 2020] dares to reduce the length dimension of key and value matrices with additional projection layers. As a result, n×d dimensional matrices are projected to k×d dimensional matrices, where k<<n. The size of the attention matrix softmax(Q′K′) is now n×k instead of n×n. This low-rank approximation reduces computational and memory complexity to O(n), but Linformer cannot decode tokens as causal masking is broken. 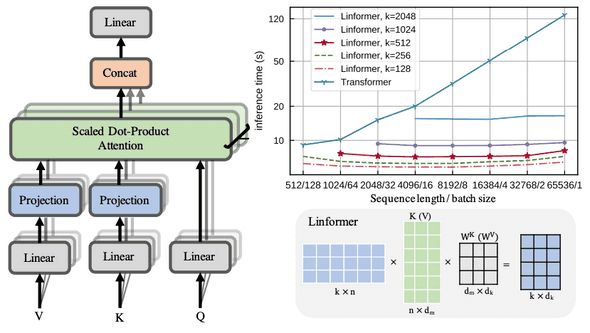 Image taken from Linformer: Self-Attention with Linear Complexity. The projection matrix (lightblue) is multiplied from the left.

Performer [Choromanski+, 2020] leverages orthogonal random features to approximate the attention matrix with provable accuracy. The proposed FAVOR+ algorithm allows Performer to scale linearly with the number of tokens. I refer interested readers to the original paper.

Unlike other X-formers, Synthesizer [Tay+, 2020] doesn’t aim to create more efficient Transformers. The main argument of the paper is that the self-attention is, surprisingly, not so important because replacing the attention maps with randomly initialized (trainable) matrices does not really hurt the model performance. This result itself is very intriguing, but it also has an additional benefit of saving memory.

Transformer-XL [Dai+, 2019] takes a unique approach to the long-term context problem. It processes a long text segment by segment, but the representations of the previous segment are reused as an external context when processing the next segment. It is worth mentioning that this recurrence mechanism also resolves the context fragmentation issue.

There are some notable applications of Transformer-XL (e.g., language model pre-training and reinforcement learning).

There are many X-formers claiming their superiority over the vanilla Transformer, but unfortunately, the evaluation protocols differ from paper to paper. Long Range Arena (LRA) [3] tackles this problem by proposing a unified benchmark that focuses on evaluating model quality under long-context scenarios. LRA score is defined as the average score of the following six tasks: 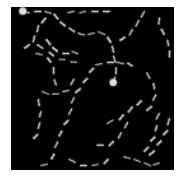 Image taken from [3]. The answer of this Pathfinder sample is "connected".

The authors locate X-formers in the following plot. The area of the circles represents the memory complexity. It illustrates that Big Bird achieves the highest score, while Performer and Linformer are making a good trade-off in terms of performance, speed, and memory consumption. 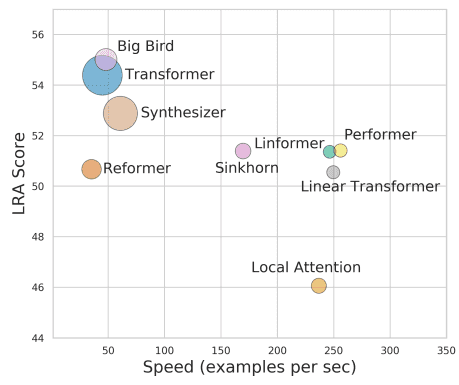 So far, I’ve presented the recent advances in X-formers in terms of their efficiency and modeling long-term context. This enabled X-formers to model data from other modals such as images. In fact, Vision Transformer achieved state-of-the-art performance on many benchmarks such as ImageNet with higher scores compared to CNN-based models like Big Transfer (ResNet152x4).

Image Transformer [Parmar+, 2018] is probably the first successful attempt to generate images with Transformer. With localized 1D and 2D attention (i.e., a combination of fixed patterns), Image Transformer is trained autoregressively on pixel sequences of images just like language modeling.

Sparse Transformer came after this and succeeded in generating more high-quality images.

Image GPT [Chen+, 2020] is also based on the same idea. It empirically proves that OpenAI’s GPT-2 is so generalizable that it can be trained on image pixels and generate visually appealing images. The image completion experiment is fun!

Vision Transformer (ViT) [Dosovitskiy+, 2020] shows that, with the large JFT-300M dataset, Transformer encoder model can achieve state-of-the-art accuracy on image classification, where it has long been believed that CNN is the optimal architecture. Importantly, the largest model (ViT-Huge) has only 632M parameters (30% smaller than BiT-L) and the training process is fast in terms of TPU-days.

Images taken from An Image is Worth 16x16 Words: Transformers for Image Recognition at Scale.

There is a concurrent work that explores self-attention-based architecture for image recognition and outperforms CNN baselines on ImageNet.

From a Perspective of Theory of Computation

While the computational power of RNNs has been investigated since the 1990s, those studies of Transformers are limited. Is the computational power of Transformers/self-attention theoretically guaranteed? If so, what about X-formers? To answer these questions, I conducted a quick survey though I’m pretty new to this area. Note that this section is far from thorough because I didn’t find a good preceding survey. I list some works that are interesting to me.

Universal Transformer [Dehghani+, 2018] proposes to combines the benefit of Transformers and RNNs. It shares parameters among layers and dynamically changes the number of layers (so it’s a recurrent function). The authors assume that, given sufficient memory, this recurrent mechanism makes Transformers computationally universal (Turing complete; it can simulate any Turing machine.) 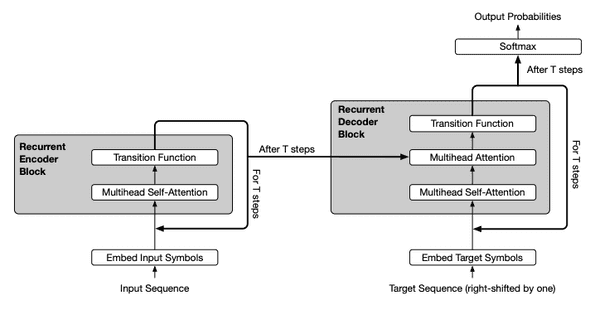 The authors empirically validate the superiority of Universal Transformer over vanilla Transformer and LSTM by a variety of tasks including simple algorithmic operations and LAMBADA.

On the other hand, Pérez et al. (2019) showed that Transformers with hard attention (and Neural GPUs) are Turing complete. It is noted that, however, there are some differences between the two works. For example, Dehghani et al. (2018) assumed fixed precision, while Pérez et al. (2019) allowed arbitrary precision during computation.

Transformers are Turing Complete even without Positional Encoding [Bhattamishra+, 2020]

Bhattamishra et al. (2020) took a further step on Transformer’s Turing completeness, stating that Transformers without positional encoding are also Turing complete and decoder-encoder attentions and its residual connections together play a critical role. They also provide some experimental results to support their theoretical analysis. 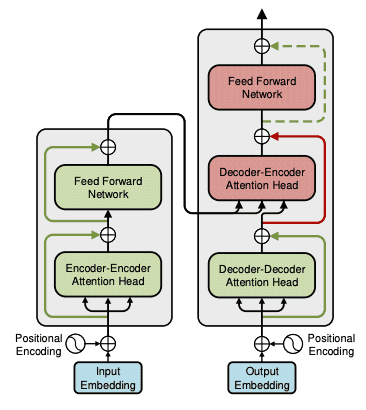 Image taken from On the Computational Power of Transformers and its Implications in Sequence Modelings. "The components marked red are essential for the Turing-completeness whereas for the pairs of blocks and residual connections marked green, either one of the component is enough. The dashed residual connection is not necessary for Turing completeness of the network".

Hahn (2019) focused on self-attention rather than Transformer, showing the theoretical limitations of the computational abilities of hard and soft self-attention. It is stated that self-attention cannot model periodic finite-state languages nor hierarchical structure. Theoretical results using synthetic tasks are provided.

It is interesting that, from these results and the recent success of self-attention in natural language understanding, the author suggests that the complexity of natural languages is limited by human capabilities.

Pre-trained language models and “BERTology” account for a large portion of the Transformer applications, but thye are too large to include in this post so I’ll try to keep it brief.

BERT [Devlin+, 2018] has sparked a boom of language model pre-training using Transformer or similar architecture by outperforming previous SOTA model on many benchmarks. There are even research works on BERT itself, which is called BERTology. For instance, it includes analyses on the learned weights, attempts to reduce parameters, memory consumption, and the amount of data required for fine-tuning, distillation, and so on. I featured a distilled version of BERT, which is called MobileBERT, in a previous post. I refer interested readers to an excellent survey paper [5].

My favorite work from BERTology is the one by Libovický et al. They created the impressive figure below to probe the language neutrality of Multilingual BERT. 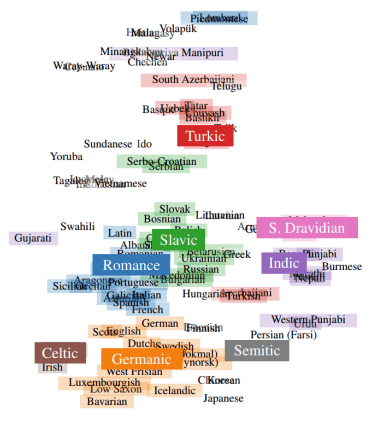 Image taken from How Language-Neutral is Multilingual BERT?

GPT-3 [Brown+, 2020] is basically a natural extension of GPT-2, with 175B parameters and 300B tokens for training. But it’s not just saying that a larger model, larger dataset, and longer training lead to better accuracy and generalizability. GPT-3 acquires, surprisingly, the ability of few-shot (in-context) learning. Each input for in-context learning typically consists of three parts: task description, examples, and prompt, and GPT-3 returns an appropriate answer without fine-tuning. For example, when the input is like:
”Translate English to French.
sea otter => loutre de mer
peppermint => menthe poivrée
plush girafe => girafe peluche
cheese =>”
the output should be ”fromage“.

Soon after OpenAI released an API of this model, some people found that it can do more than translation and generating sentences. For example, it is reported to be able to translate English to JSX code.

This is mind blowing.

With GPT-3, I built a layout generator where you just describe any layout you want, and it generates the JSX code for you.

mT5 [Xue+, 2020] is a multilingual version of Text-to-Text Transfer Transformer (T5), which frames any text-based task into a text-to-text format and solve it in a unified way. mT5 covers as many as 101 languages and its largest variant has 13B parameters. The authors released the custom-made dataset mC4 as well as the model.

Image taken from Exploring the Limits of Transfer Learning with a Unified Text-to-Text Transformer.

We’ve seen the recent advances in Transformers, particularly in terms of computational efficiency, applications to images, computational theory, and language models. Now it’s safe to say Transformer is one of the most important breakthroughs in machine learning.

This post has become the longest one written in English. Thanks for reading, and I appreciate your comments and feedback!