In 2020, the Machine Learning community has seen a lot of new achievements. I believe winter vacation is a good time to look back on the year, so this post will cover 10 representative papers that I found interesting and worth reading.

Here are the 10 best ML papers of 2020 that I chose (in chronological order).

The lottery ticket hypothesis [1,2] argues that training neural networks is like a lottery. According to [1], network pruning is feasible because:

So, should we always start with a large network, aiming to draw a winning ticket and drop losing tickets (unnecessary subnetworks) after the winner announcement (training & validation)? This paper answers no. The authors introduce a method to train sparse neural networks by iteratively dropping and growing connections with the model size fixed throughout the training. The proposed training strategy is named RigL, as it “rigs the lottery ticket hypothesis.” The algorithm of RigL is summarized as below:

PIFuHD is an updated version of PIFu (Pixel-aligned Implicit Function) [4], a deep learning method for reconstructing a 3D human shape from a single image. I chose this paper because it’s fun! Not only are the result remarkable (see the image below), but the authors provide a Colab demo that you can try out with your own images instantly. 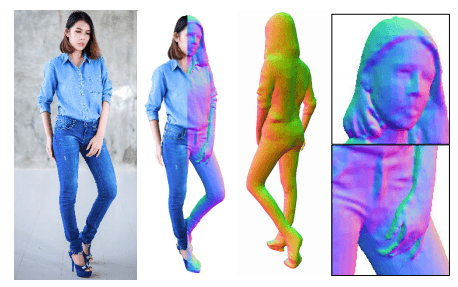 Many people have tried this demo and uploaded their results to #pifuhd. One of my favorites is the video of G7 leaders dancing to a song by Sakanaction.

For technical details, I’d like to recommend the excellent presentation video by the authors.

Jukebox: A Generative Model for Music

Generating realistic images is no longer surprising, but generating realistic music remains a hard challenge due to its extremely long-range dependency. Specifically, a 4-minute song at CD quality (44 kHz) has more than 10 million timestamps with high-level semantics (c.f., intro, verse, chorus). OpenAI boldly tackled the generation of raw audio in a variety of genres, and their Jukebox succeeded in producing pretty impressive music!

Here are the non cherry-picked 7,131 samples. They are conditioned on specific genres and artists, some of which are also conditioned on lyrics. For example, this sample is a continuation of I Just Call To Say I Love You by Stevie Wonder. It sounds like a new song after 10 seconds, while reasonably maintaining the style of the singer and the song.

What is inside this magic? Inspired by VQ-VAE-2 [5], the authors use hierarchical VQ-VAE to handle long-range dependency. As for the prior (or, the generator), they use Sparse Transformer [6], an efficient Transformer that succeeded in generating 64x64 sized images and raw audio waveforms, as already mentioned in my earlier post.

The details are explained with informative GIFs in the official blog post.

The appendix of the paper is also worth reading. The figure below is a t-SNE plot of (artist, genre) embeddings learned by Jukebox. I agree that ELO is similar to The Beatles😉 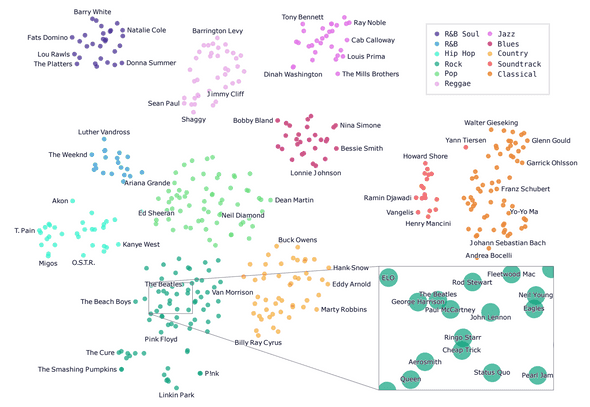 GPT-3, the latest version of GPT [6,7], is a pre-trained language model that has as many as 175B parameters (10 times larger than Turing-NLG!) and is trained with 300B tokens. The authors found that scaling up the model significantly improves the performance of few-shot learning without fine-tuning, which they call in-context learning. The following figure compares in-context learning with traditional fine-tuning. 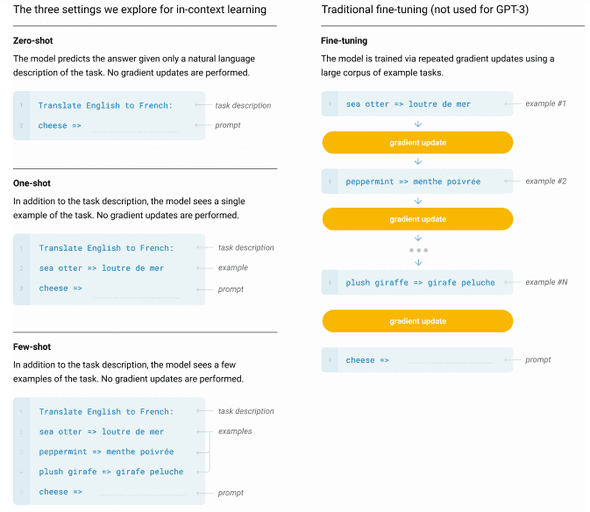 In short, in their in-context few-shot learning, the model sees the input containing task description, a few examples, and prompt only at inference time and predicts the answer. There is no training or fine-tuning. GPT-3 can deal with a variety of tasks such as translation, text generation, summarization, question answering, and even arithmetic. Sometimes it outperforms fine-tuned models. 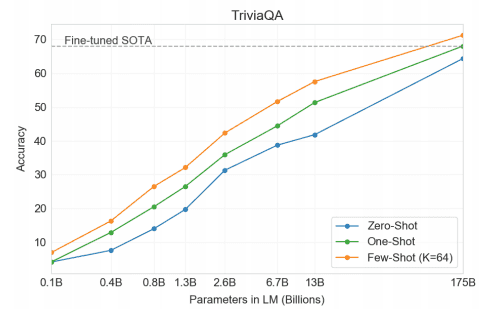 More surprisingly, it is reported that GPT-3 can translate English into JSX code. Indeed, quantitative changes transform to qualitative changes.

This is mind blowing.

With GPT-3, I built a layout generator where you just describe any layout you want, and it generates the JSX code for you.

OpenAI releases the GPT-3 model as an API instead of pre-trained weights. If you wish to use it, join the waitlist for the beta version.

Bootstrap Your Own Latent: A New Approach to Self-Supervised Learning

Contrastive learning, a variant of self-supervised learning algorithm that leverages information from negative samples, was probably one of the hottest research topics in 2020. Many methods such as MoCo, SimCLR, and InfoMin, competed for the higher accuracy on ImageNet classification [8-10]. They are based on the assumption that the distance between representations of different augmented views of the same image should be small while the distance between different images should be large.

As opposed to them, the proposed Bootstrap Your Own Latent (BYOL) does not use negative pairs at all and outperformed all the contrastive learning methods, closing the gap between self-supervised and supervised learning. 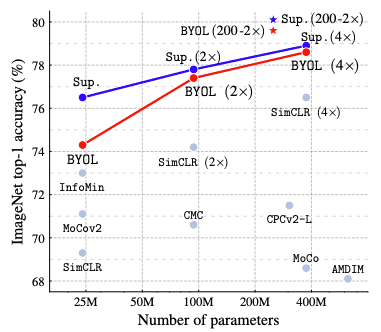 As shown in the figure below, BYOL uses two networks: online (θ) and target (ξ), where the target network is simply the exponential (slow-)moving average of the online network.

An input image x is transformed into two views v and v′ with different augmentations (t and t′), which are then fed into the online and the target network respectively. BYOL is trained to minimize the L2 distance between the prediction by the online network (qθ​(zθ​)) and the projected representation by the target network (sg(zξ′​)), where sg means the stop-gradient operator. This is how BYOL bootstraps its latent.

An additional benefit of BYOL is the robustness to the choice of batch size and the set of image augmentations compared to the contrastive baselines. Also, there is a discussion on how to avoid collapsed solutions in the paper. Please check it out if you are interested.

Many scientific problems fall into the learning of implicit neural representations. For instance, implicit neural representations can model images, audio signals, and 3D shapes and can solve boundary value problems. However, the popular ReLU-MLP networks fail to represent fine details in the signals and their derivatives well, partly because the second derivative of ReLU is zero everywhere. Other nonlinearities such as tanh or softplus can represent higher-order derivatives, but they also fail to represent fine details.

To address this issue, the authors present neural networks that leverage periodic, n-times differentiable sin(⋅) activation, which is named sinusoidal representation networks (SIREN). The benefits of sinusoidal activation are best illustrated in the figure below, which compares different implicit networks fitted to the ground truth image. Unlike other activations, SIREN is able to learn by itself the Gaussian and Laplacian well.

One may wonder “why no one has ever come up with this simple solution?” Well, periodic activation functions have been studied for more than 10 years, but I guess there two factors that make this work still new in 2020. First, it hasn’t been explored very much how to apply periodic activations to implicit neural representations. Second, SIREN requires a special initialization scheme. To preserve the distribution of activations through the network, the initial weights of SIREN have to be drawn from a carefully designed uniform distribution.

More samples including audio and differential equations and their presentation video can be found on the project page.

This exciting work was done by a collaboration between graph and computer vision researchers.

There is no doubt that StyleGAN2 is great and successful [11], but it still has a problem of requiring a huge amount of data and computation. In fact, for learning to generate 1024x1024 sized FFHQ face images, StyleGAN2 used 8 Tesla V100 GPUs and 70,000 images, and it took 9 days for the entire training process. This is almost impossible for small laboratories and companies who want to reproduce the results. Also, that huge demand limits the potential applications of GANs in production.

This limitation was quite obvious, and 6 months after the publication of StyleGAN2, the authors released StyleGAN2-ADA (StyleGAN2 with adaptive discriminator augmentation) [12]. They introduced a new technique in data augmentation for the discriminator, allowing StyleGAN2 to generate as fine images as the original model with a few thousand training images.

The authors of this paper made a step even further. This paper proposes the so-called Lightweight GAN, which adopts skip-layer excitation modules and an autoencoder-like discriminator to generate FFHQ images by training for a few hours with a few hundred images on a single RTX-2080 GPU! 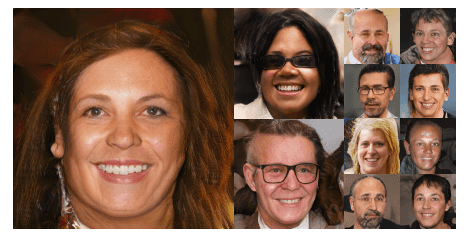 And fortunately, Phil Wang released a beautiful and easy-to-use implementation of Lightweight GAN at GitHub. Now, using Colaboratory or any GPU at your disposal, it’s possible to generate almost any image you like. They indeed democratized GANs!

I tried it out to train Lightweight GAN with just 200 sushi images. After training, it generated fairly realistic sushi images as shown below. The generated images are also displayed at ”This Sushi Does Not Exist”. So, what GANs do you want to create? 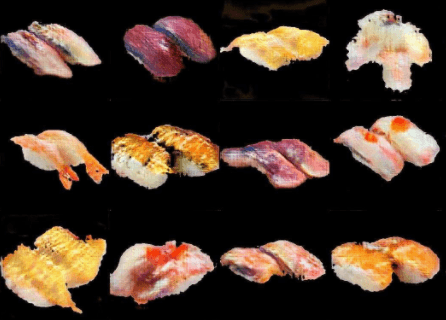 For more details, please refer to the original paper and my previous post.

An Image is Worth 16x16 Words: Transformers for Image Recognition at Scale

This year has seen a lot of attempts to apply Transformers to computer vision tasks. Cordonnier et al. investigated the equivalence of self-attention and convolutional layers [13]. Chen et al. used GPT to generate images in an autoregressive way [14]. Carion et al. applied Transformers to object detection [15]. With such studies in mind, it’s not unnatural to create a Transformer-based pre-trained model for image classification.

Motivated by this, a team from Google Research trained Vision Transformer (ViT), achieving the new state-of-the-art over CNN baselines such as Big Transfer (BiT) and Noisy Student. Let’s get an overview of ViT from the figure below, because “a picture is worth a thousand words”. 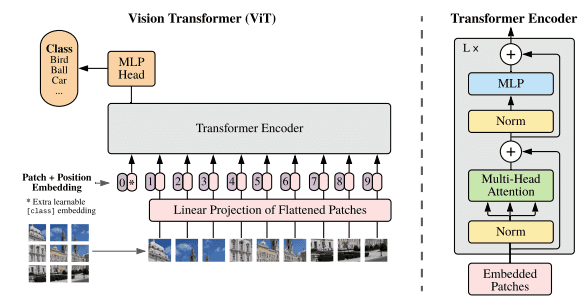 As the title implies, images are split into small patches (16x16) and fed into the projection layer with position embeddings, in the same way that the tokens are embedded and fed into the encoder in the vanilla Transformer. The entire model is trained to minimize the classification loss (so, it is supervised learning).

The authors report that ViT does not generalize well when trained with “mid-sized” ImageNet dataset due to its smaller inductive bias, but it outperforms CNN baselines when trained with 300 times larger JFT-300M dataset. Nevertheless, ViT uses up significantly fewer computational resources than BiT and Noisy Student.

Now that it is found that supervised pre-training works for image classification with a huge Transformer model, I guess a self-supervised version will appear this year.

Pre-training with large datasets proved to be the key better accuracy. However, such datasets often involve issues such as mistaken labels, copyright violation, privacy violation, and unethical biases. To address these, this paper shows that artificial images can be used for pre-training.

Specifically, the authors prepared Fractal Database (FractalDB) by a certain algorithm and pre-trained ResNet-50 with it.

There are other interesting papers that I could not include here. If you have any recommendations, please feel free to comment.

Thanks for reading this long post. Hope you have a good one!